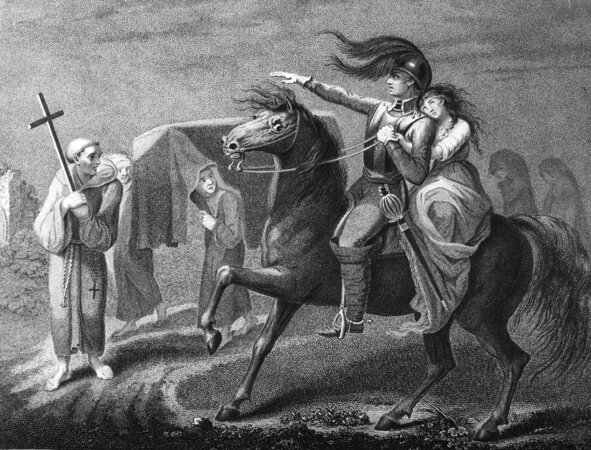 The Fables of John Dryden, ornamented with Engravings from the pencil of the Right Hon. Lady Diana Beauclerc. London, T. Bensley for J. Edwards, 1797.

A good copy in an Irish binding of these two works lavishly illustrated by Lady Diana Beauclerk. The daughter of Charles Spencer, 3rd Duke of Marlborough, Lady Di, as she was known, suffered two miserable marriages, the first to Frederick St. John, 2nd Viscount Bolingbroke, during which they were both notoriously unfaithful, and the second to Topham Beauclerk (1739-1780), the great-grandson of Nell Gwyn and Charles II. Beauclerk was a close friend of Dr. Johnson and was known for his brilliant conversation, but he was also famous for his ill-humour and lack of personal hygiene: Fanny Burney recorded Edmund Burke’s reaction to the death of Beauclerk: ‘I never, myself, so much enjoyed the sight of happiness in another, as in that woman when I first saw her after the death of her husband’.
‘During [the years following her divorce] Lady Diana's artistic talents became particularly evident: she practised portraiture, and her enormous output of small drawings of fat cupids entangled in branches of grapes and little girls wearing mob caps gave place to larger and more ambitious groups of peasantry introduced into landscaped backgrounds. She worked chiefly in pen and ink, pastel, and watercolour. Essentially a designer, she successfully executed seven large panels in ‘soot ink’ (black wash), mounted on Indian blue damask and illustrating Horace Walpole's tragedy The Mysterious Mother. Apt to overrate her skills, Walpole placed these at Strawberry Hill in a specially designed hexagonal room named the Beauclerc closet. At the same time he opined absurdly that ‘Salvator Rosa and Guido could not surpass their expression and beauty’ (Anecdotes of Painting, 24.524). Lady Diana also enjoyed the patronage of Josiah Wedgwood, probably from 1785, when her designs, mostly those of laughing bacchanalian boys, were translated as bas-reliefs onto jasper ornaments, plates, and jugs; they proved to be enormously popular. In 1796 she illustrated the English translation of G. A. Burger's ballad Leonora and in 1797 The Fables of John Dryden; in both cases her illustrations were engraved mostly by Francesco Bartolozzi’ (ODNB). The other engravings in the Dryden are by Vandenberg, Cheeseman and Gardiner.