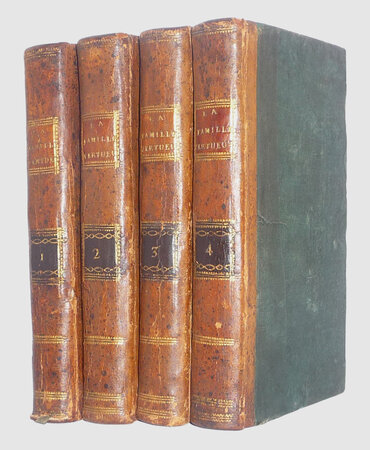 The first edition of Restif’s first published work, an epistolary novel in four volumes. It is not a translation from the English, as claimed on the title-page in fashionable style, but is an original work about an aristocratic family and their adventures in France and England. It is printed by Quilleau, for whom Restif worked as a proof-reader and compositor, and is the first of several novels that Restif managed to get printed during his time there. It made him a profit of 765 livres and it was on the strength of this that he left the printing house and started writing professionally.
The Epître (pp. v-xiv) is addressed ‘Aus [sic] Jeunes Beautés’ and is followed by a prefatory ‘Lettre de Mistress Eleanor à Miss Bridget’ (xv-xxxvi) in which Eleanor explains how she came by the letters. Travelling between Kent and Hampton Court, her father was set upon by some vagabonds and would have perished but for the intervention of Lord B*. As usually follows in these situations, Eleanor’s simple delight at her father’s safety delighted Lord B* who suggests that she become a companion for his daughter, Miss Cecily. Cecily is a descendant of the comte de Lisse, one of the main protagonists in the unhappy story that follows and Cecily, enraptured by her new friend, gives her all the letters with a view to her arranging and publishing them.
The title pages are set within the typical Restif ornamental printed borders. Rives Childs (197-198) states that 2000 copies were printed - an impressive number for a first work and a sure sign of Restif’s involvement in the printing process - nonetheless the novel is now hard to come by and is comparatively scarce.