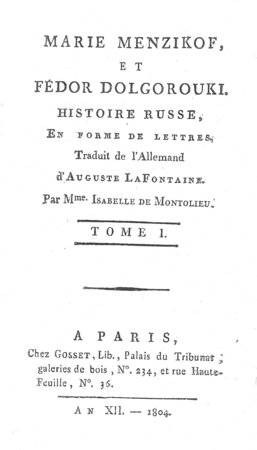 First Edition in French. Two volumes, 12mo, (155 x 90mm), pp. viii, 376; [ii], 291, bound without the half-titles, in contemporary half calf over marbled boards, flat spines ruled and gilt in compartments, lettered and numbered in gilt directly onto the spines, joints slightly splitting, some wear to extremities, attractive but for a sizeable piece of leather missing from the head of the spine of vol. I (10x17mm), with the bookplates of John Drummond and Anthony Surtees.

An epistolary novel by Auguste Lafontaine, set in Russia in the early eighteenth century and translated by Isabelle de Montolieu, a writer strongly influenced by the German and English literature of the time. Lafontaine’s romantic fiction had a wide readership among women throughout Europe and was enormously popular in England. Summers lists some thirty titles published in English, in some cases in more than one version, many of which, including the present novel, were printed by the Minerva Press. The present novel, first published as Fedor und Marie in 1803, was translated as Dolgorucki and Menzikoff, A Russian Tale, London, Minerva Press, 1805 (see Blakey p. 214). There was also a three volume ‘Londres’ edition of this French translation, also 1804, but Cioranescu gives precedence to this Paris edition.