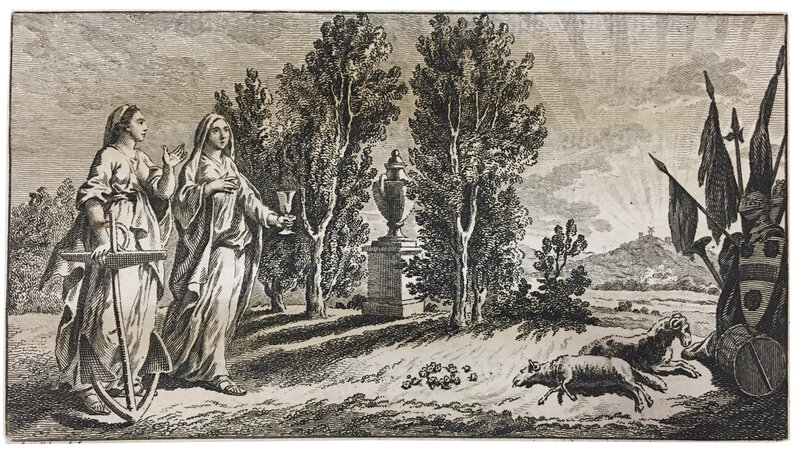 Edge-Hill, or, the Rural Prospect Delineated and Moralized. A Poem. In Four Books. By Richard Jago, A.M. London, J. Dodsley, 1767.

One of the most influential topographical poems of of his day written by the Warwickshire born poet, Richard Jago. In the brief preface the author makes an apology for the locality of the setting, inspired by his own affection for the place as well as its ‘natural beauty and historical importance’, insisting that he has ‘endeavoured to make it as extensively interesting as he could, by the frequent introduction of general Sentiments, and moral Reflections; and to enliven the descriptive Part by Digressions, and Episodes belonging to, or easily deducible from the Subject; divesting himself as much as possible of all Partiality in Matters of a Public Nature, or Concernment; in private ones, following with more Freedom, the Sentiments, and Dictates of his own Mind’.

‘Jago's major work, Edge Hill, or, The Rural Prospect Delineated and Moralized, in four books, was first drafted by 1762 and published by James Dodsley in 1767. In this topographical poem he considered not only the local landscape that he loved but also theories about how mountains came into being, his reminiscences of Somervile and Shenstone, and reflections on the earl of Leicester's entertainment of Queen Elizabeth at Kenilworth Castle, ending with an account of the civil war battle of Edgehill in 1642’ (ODNB).

In 1767, Jago collaborated with Richard Graves in preparing an edition of Shenstone’s letters. Jago’s poem about Shenstone, a lifelong friend, and his famous country estate, The Leasowes, was published as Labour and Genius, or, the Mill-Stream and the Cascade, in 1768. With a long list of subscribers including the great and the good from all over the country - the Archbishop of Canterbury, the Earl and Countess of Donegal, numerous fellows of Oxford and Cambridge - but also a large local contingent, including members of Jago’s family, inhabitants of Edge Hill and the book societies of Derby and Coventry. This copy has a nice provenance, of Richard Savage, who was librarian at Shakespeare’s Birthplace, particularly given the locality of the poem which is about Warwickshire and of the delightful engraved head-pieces which depict local architecture and beauty spots such as Warwick Castle.