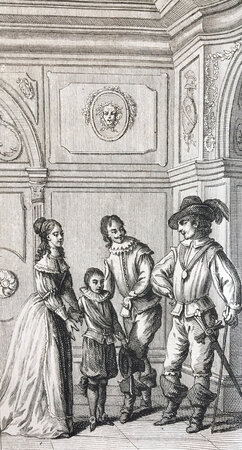 A working copy of this popular and much-reprinted utopia by the Abbé Prévost, based in part on his experiences as an exile in England. The hero, Cleveland, is the illegitimate son of Cromwell who is forced to flee England to avoid reprisals from his father. First he visits the exiled Stuart court in France - the mirror image of Prévost’s own exile - and then travels to America where he discovers what at first he perceives to be an ideal community which he describes in some detail. After much philosophising, he reaches the disappointing conclusion that a perfect society is not attainable with man’s moral limitations. Cleveland’s eventual return to England coincides with the Restoration, when he is welcomed home and rewarded with the appointment as a Privy Councillor in a newer, improved England.
This is one of Prévost’s earlier works, which first appeared one volume at a time between 1731 and 1738 and was first published in its complete form in 1741. It was enormously popular and ran to numerous editions and translations throughout the century, including Dutch, English, German and Danish. It is simplest to describe this as a ‘new edition’: Gove amusingly says of Le Philosophe Anglois, ‘For no other work in my check list is the available bibliography in a more chaotic condition’ (p. 281).