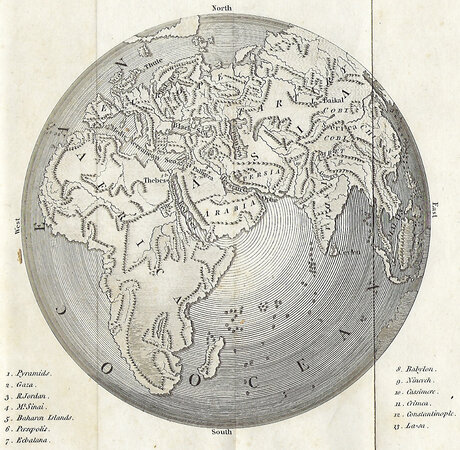 The Ruins: or a Survey of the Revolutions of Empires. By M. Volney, one of the Deputies to the National Assembly of 1789; and Author of Travels into Syria and Egypt. Translated from the French. The Third Edition. London, Joseph Johnson, 1796.

First published in 1791, Volney’s Les Ruines, ou méditations sur les révolutions des empires was widely influential among radicals and free-thinkers in the Romantic period. Its influence spread from France and England to America where Thomas Jefferson translated the first part. This is one of the books that the monster from Mary Shelley’s Frankenstein finds when he is hiding in the hovel. From it he learns the best and the worst of mankind: ‘These wonderful narrations inspired me with strange feelings. Was man, indeed, at once so powerful, so virtuous, and magnificent, yet so vicious and base? I head of the division of property, of immense wealth and squalid poverty; of rank, descent, and noble blood’.
Volney’s work was first published in English, by Johnson, in 1792. As noted in ESTC, this is not a reissue of the 1795 edition, despite the similar pagination: the press figure on p. 2 is 6, where that in the 1795 edition is 5.