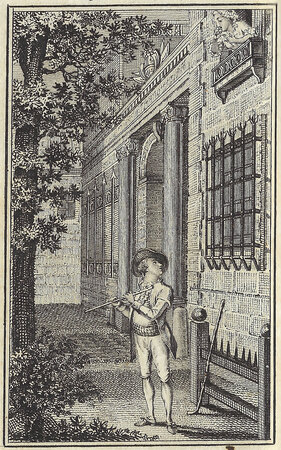 Fifth Edition. Two volumes, 12mo ( 123 x 79 mm), engraved frontispiece to each volume and pp. [ii], 187; [ii], 236, in contemporary mottled calf, single gilt fillet to covers, flat spines gilt in compartments, black morocco labels and numbering pieces lettered and numbered in gilt, with the ownership inscription of Lady Hunloke on the front pastedown of each volume: slight wear to extremities but a nice copy.

Jean Claude Gorgy, a minor sentimental novelist, had his hour of glory with this little novel, which was first published in 1784. ‘Nouveau Voyage Sentimental contains engaging pages, true paintings, a happily studied dialogue, and above all, a frank feeling of honesty. There is reason to believe that there is much of Gorjy's own history as the secretary of the Marquis de Villeurnoy’ (Larousse). As can be seen from the title, this production was heavily influenced by Sterne. It was very popular and was republished numerous times in France as well as in Germany and England. Gorgy later published another tribute to Sterne, a sentimental novel called Ann'quin Bredouille, ou le Petit-Cousin de Tristram Shandy, Paris, 1792.