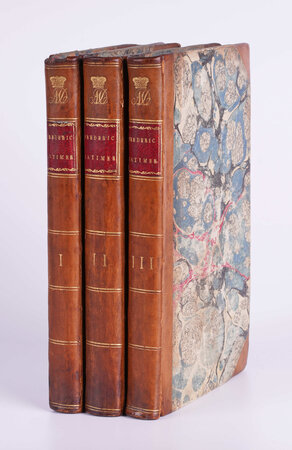 A handsome copy of a highly readable novel, with a nice contemporary female provenance. The story tells of the early life of Frederic Latimer, from his infancy, the death of his father, who was a naval hero and a son of the Earl of Cressy, the remarriage of his mother to the elderly Duke of Annan and her subsequent neglect of him, his school days when he was ‘the best scholar, the best cricketer and the best boxer of Westminster School’ (p. 68), his life at the house of his tutor, Mr. Darewell, and his falling in love with Charlotte, Mr. Darewell’s daughter. In alarm at this inappropriate match, the tutor sends Frederic to Oxford, where the fellows’ social life of stale political jokes, sixpenny whist, ale and smoking does little to cure his heart ache. Innocent and trusting by nature, it is not long before he falls into bad company and in one night of gambling and rather too much wine he ‘exchanged a situation of ease and independence for one of debt and embarrassment’. The debt takes him to London where he has further adventures and begins to wise up a bit. He enlists in the guards, finds more genuine friends, resists a profitable marriage, is posted to the West Indies, succeeds to the peerage on his return and is finally united in marriage to the faithful Charlotte.

This is Le Maistre’s first work, with the following apology by way of preface: ‘The Author of the following trifle has concealed his name, because, unknown in the literary world, its disclosure would have increased his anxiety, without contributing to his success. He has dedicated this little work to no individual; because the Public is the only patron whom he is ambitious of pleasing; and he adds this Preface, merely to solicit for “Frederic Latimer” that indulgence which is usually shewn to a first attempt’. The author’s hope seems to have been gratified, for the novel was well received by the reviewers. The Critical Review commended it as a good first work in which ‘The follies and absurdities of fashion are well satirised’ whilst Thomas Wallace in the Monthly Review wrote: ‘In these volumes, the reader will find the vices and follies of the woman of fashion, the frauds of the gambler, the arts of the coquette, the levity and generosity of youth, and the dignity of worth and wisdom, described with considerable judgment, in the course of a story of which the plot is interesting, and, except one or two incidents towards the denouement, sufficiently natural’.

Provenance: Mary Hill, Marchioness of Downshire, Baroness Sandys (1774-1836), with her crested monogram in the upper section of each spine, and her ownership inscription on two of the three volumes.