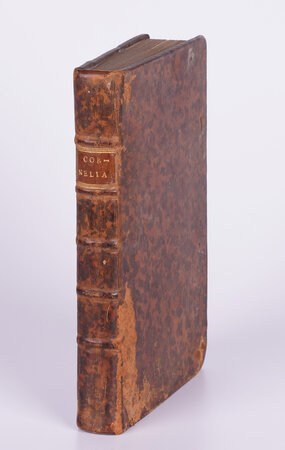 The scarce first Dublin edition of Sarah Scott’s first novel, written shortly before her marriage and nine years after she had contracted smallpox. At the time, smallpox was regarded as disastrous for a woman on account of its harmful effect on physical beauty which would lower a woman’s value in the marriage market. The illness had had a life-changing impact on Scott and her literary output as it directed her away from a life of ‘social success... towards a life dedicated to writing, domestic female friendship and Christian philanthropy’. The circumstances of Scott’s disastrous marriage and its abrupt end have never been revealed, but in 1752, her family intervened and removed her from her husband’s home, after which she went to Bath to live with her earlier companion, Lady Barbara Montagu (c. 1722-1765). Here they established a small community, offering a basic education in literacy, numeracy and needlework to poor children, particularly to young girls. Scott started writing again in order to help with the expenses of their philanthropic projects. It was this community, and its underlying philosophy, that was to inspire her most well-known work, the utopian A Description of Millenium Hall and the Country Adjacent, 1778.
This is one of only two editions of The History of Cornelia, which was first published by A. Millar in London, earlier the same year (ESTC t119494, at BL, Cambridge, Bodleian, Bristol, Hull, Cornell, Harvard, Huntington, Indiana, Newberry, Ohio State, Princeton, Stanford, Alberta, British Columbia, Bncroft, Clark, Chicago, Illinois, Penn and Yale).

ESTC t68564, BL and National Library of Ireland only.