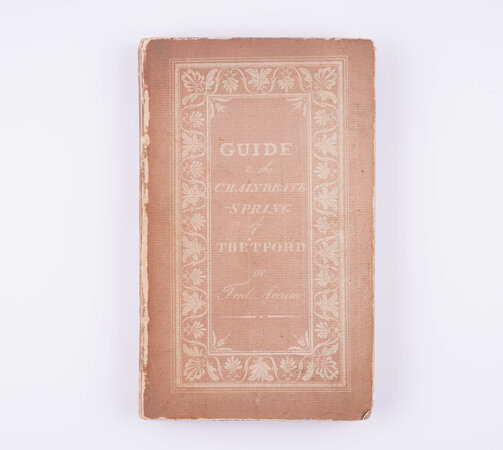 Guide to the Chalybeate Spring of Thetford, exhibiting the general and primary effects of the Thetford spa... with Observations on Bathing, and a Sketch of the History and Present State of Thetford. By Fredrick Accum, Operative Chemist... With Copper Plates. London, T. Boys, 1819.

A delightful uncut copy in the original pink and white lithographed covers, with the beautiful folding hand-coloured aquatint frontispiece. This scarce work on spa baths in Thetford was written by Frederick Accum, a London chemist and member of the Royal Academy of Sciences. It was produced to advertise the new commercial spa venture established in the same year to exploit a chalybeate spring in the city, known since 1746. The dedication praised the Mayor’s and inhabitants’ efforts ‘in bringing the mineral spring of Thetford, for its healing virtues inestimable, yet suffered long to remain neglected and unknown, into celebrity and use’ through the construction of a new pump-room and baths. After providing accounts of the topography and history of Thetford, Accum discussed the chemical and medical properties of the mineral water as well as the most effective ways to take spa baths (e.g., hot or cold, according to the conditions to be treated), supported by testimonials of men and women who had benefited from the Thetford treatments.
‘One of the rarest works by Accum on Thetford Spa in Norfolk with details of the analysis if the waters at pp. 55-76. The only title cited by Waring on Thetford Spa. Not listed in any of the chemical bibliographies except Smith’ (Neville I, p. 7).