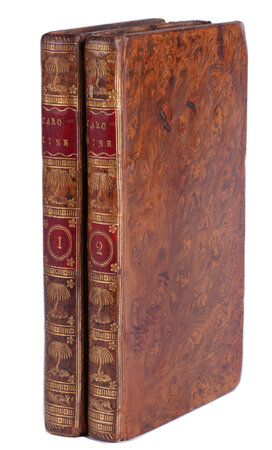 A handsome copy of the true second edition of his hugely popular and influential novel. First published in Lausanne, ‘aux dépens de l’auteur et chez François La-Combe’, 1786, as simply ‘Caroline’, this is the first edition to use the full title under which the novel was subsequently printed and known. Buisson published two more editions in 1786, one designated ‘seconde édition’ (ESTC t136845) which has title-page vignettes of a landscape with trees (volume I) and buildings and a parley of instruments (volume II) and one designated ‘nouvelle édition, avec des corrections considérables’ (ESTC t136846) with title-page vignettes of an a flower (volume I) and two horsemen and a dog (volume II). The present edition, which was probably printed in Paris, is not the same as ESTC n42696, with its fruit basket title-page ornament and probable manuscript asterisks, but both title pages have the same small vignette, of a garlanded cherub on fronds and the asterisks on the title-page are printed. The translator of Werther, as mentioned on the title-page, is Jacques Georges Deyverdun.

Countless editions were published, in French and English: ESTC lists eight editions of the French text published under British imprints. Most of these imprints are false but they do include some piracies which would be genuine London printings using spurious Paris printers’ names. MMF list 16 editions of the French text between 1786 and 1828. Thomas Holcroft translated the novel into English and his version was treated with critical acclaim. Samuel Babcock in the Monthly Review wrote: ‘In this beautiful and interesting novel, the lights and shades of character are blended with great ingenuity: and in every part of it we discover the hand of an elegant and skilful artist. With wonderful energy and address, the Authoress unfolds the secret springs and complex movements of the human heart; and so forcibly are the different feelings that agitate the soul, delineated by her magic pencil, that they strongly awaken the sympathy of the reader, and interest him in the distress of the story’ (March 1787, pp. 265-266, see Raven & co., 1786:34).