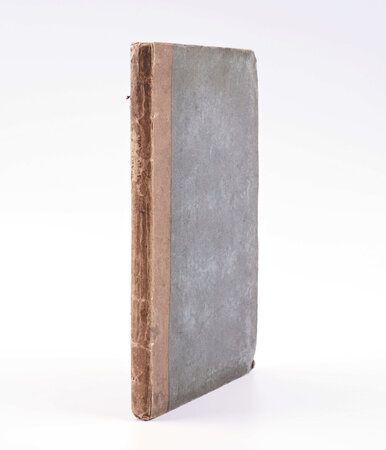 A nice unsophisticated copy of this extraordinary account of Paris in the aftermath of Napoleon’s defeat at Waterloo. In his preface, the author describes how he made his way to Paris as soon as it was possible to do so when the borders were reopened. Presented as a series of letters to a friend, his work has a remarkable immediacy to it, conveying the bustle and confusion, the conflicting reports and lack of information across the city as he and his companions go about their lives, having breakfast, watching the allied armies go past, visiting the theatre and the opera and writing up his experiences of the day late into the night in his hotel.
‘Being anxious to witness the second entry of the allies into that city, which, it was to be expected, would take place after the battle of Waterloo, the Author proceeded to Calais, as soon as the communication was opened; and he had the good fortune to be again present at the extraordinary and splendid scenes which presented themselves in Paris during the month of July last... From the unsettled state of France, and the suspense and anxiety of every class as to the result of affairs, added to the difficulty of obtaining information, it was not possible to enter into a full detail of events; but they are shortly described as they occurred, the Author having wrote his remarks at the moment, according to the impressions which they made upon his mind’ (Preface, pp. iii-v).
William Dorset Fellowes was the son of Dr. William Fellowes (b.1738), a surgeon in the armed forces who became physician extraordinary to George IV. William Dorset Fellowes was so named after being born on board the Dorsetshire during a voyage to Minorca in 1769. As a young man he joined the navy and was on board the ‘Lady Hobart’ when she hit an iceberg off the coast of Newfoundland and sank. Fellowes was one of eighteen survivors, including three children, who escaped in a lifeboat and managed to avoid sinking and starvation (and a series of other ‘deplorable calamities’) before being rescued over a week later. Hester Lynch Piozzi was a close friend of the Fellowes family and William’s younger brother, Sir James Fellowes, was Piozzi’s literary executor.