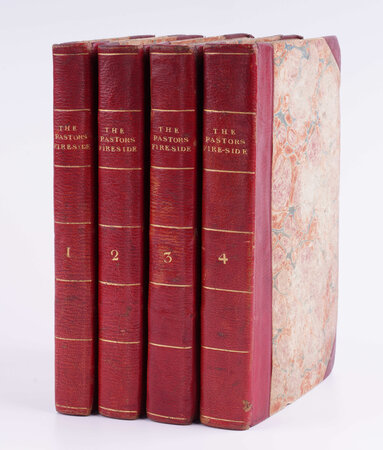 The Pastor's Fire-Side, a Novel, in Four Volumes. By Miss Jane Porter, author of Thaddeus of Warsaw, Sidney’s Aphorisms, and the Scottish Chiefs. Vol. I [-IV]. London, Longman &c., 1817.

An attractive copy of this popular historical romance by Jane Porter, set in the eighteenth century in Lindisfarne and following the fortunes of the members of the royal house of Stuart. The villain in The Pastor’s Fire-Side, Duke Wharton, is said to have been based on Lord Byron. Thomas McLean, in his essay ‘Jane Porter and the Wonder of Lord Byron’, describes Wharton as having ‘an unmistakably Byronic shadow’.
‘This novel shows a more than usually acute sense of local colour in its delineation of the area around Lindisfarne, of which Porter may have refreshed her early acquaintance when she went in 1804 to nurse her friend the man of letters Percival Stockdale’ (Dorothy McMillan in ODNB). The Porters lived around Bamburgh and Lindisfarne during Jane’s youth.