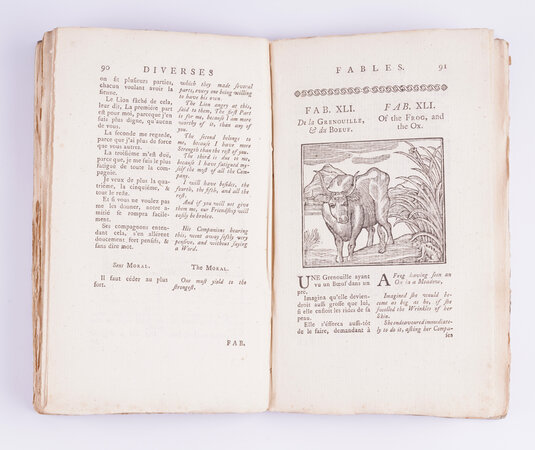 Sixty Amusing and Instructive Fables, in French and English. Divided into Sections, and the Two Languages answering almost verbatim, for the Greater Convenience of Learners. The Whole adorned with Cuts. Designed principally for Schools. The Fifth Edition, Carefully Corrected and Improved. London, Johnson, 1773.

A delightful children’s edition of sixty of Aesop’s fables, printed in parallel text in English and French, with woodcut engravings throughout. The woodcuts, one to accompany each fable, are mostly unsigned, but a good number bear the initials ‘JE’ or ‘WP’. This selection was first published in 1732 as Amusing and instructive fables in French and English, and all earlier editions are scarce. The 1732 edition is not in ESTC but OCLC lists a copy at Trinity College Dublin; both OCLC and ESTC lists one copy only of the 1738 ‘second edition’ (second volume dated 1736), at the National Library of Scotland. ESTC also lists two copies of the 1747 second edition of Vol II and the ‘third edition’ of Vol I (both at BL and Bodleian only). This title was first used in the 1760 edition, located in OCLC at Princeton only and not listed in ESTC.

‘It was thought necessary to adorn these Fables with Cuts, as daily experience shews, that young People are fond of pictures; and that many Children, who would never look into books, were they unadorned, are thereby often allured, and invited to turn them over. The delight Cuts give to the eye, makes young People attend with pleasure to the explanation of them; and by this means they imbibe, at an age when they are most susceptible of impression, many solid and rational principles, which are of use ever after’ (Preface, pp. iii-iv).