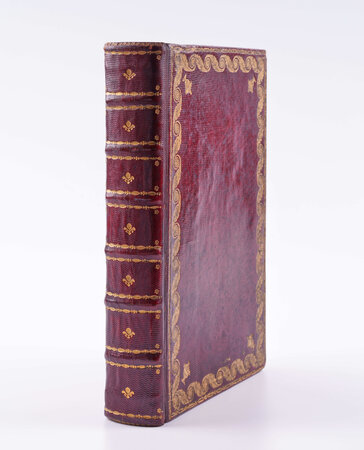 An exquisitely bound copy of the ‘horae’ of the Virgin Mary, once in the library of the great Neapolitan collector, bibliophile, bookseller and bookbinding scholar, Tammaro de Marinis (1878-1969).
It was printed by Giovanni Maria Salvioni (1676-1755), who was in charge of the Vatican Press from 1717. The elegant binding was probably produced after the style of the Salvioni workshop, known for its use of painted edges - ‘a revival of a form of decoration unknown in Rome since the reign of Pius V’, who died in 1572 (Hobson, French and Italian Collectors and Their Bindings, p.190). In it, the gilt and lavishness of the Roman fashion merges with the charming modesty of provincial workshops.
The ‘Uffizio’ includes a calendar of mobile feasts and saints’ days, instructions on recitation, the psalm, readings and hymns for each hour of the day during the liturgical year, followed by the Office of the Dead, the Seven Penitential Psalms and others prayers and orations. Although it was originally intended for the religious, lay people were also encouraged to devote part of their day to the recitation of the ‘horae’ to the Virgin Mary. The handsome engraved illustrations in this edition, both delightful and useful as aides-mémoire, were produced by Arnold Westerhout, Joseph Passarus and J. Hieronymus Frezza. They portray key scenes from the Old Testament, such as Adam and Eve being banned from Eden (in the frontispiece), and scenes from the life of the Virgin.

OCLC lists a handful of copies in Italy, and V&A, Harvard and Brown.