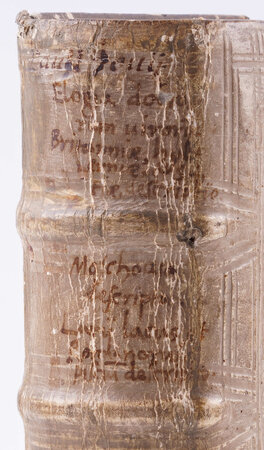 A scarce edition, in three parts, of five major works by the Italian physician, historian and biographer Paolo Giovio, including his account of Muscovy and his history of Britain.
The first part features the ‘Elogia doctorum virorum’ of 1546 - an encyclopaedia of early humanism celebrating with short biographies important scholars of the time including Trapetiuntius, Regiomontanus, Thomas Linacre, Copernicus, Machiavelli and Zwingli. The second includes his ‘Descriptiones Britanniae, Scotiae, Hyberniae & Orchadum’ of 1548, devoted to the history and ethnography of the British Isles, followed by ‘elogia’ of important British figures including Thomas More, chronological annals of the kingdom and a genealogical diagram of the kings of England. The third part begins with his influential account of Muscovy first published in 1525: a fundamental source for the knowledge of Russia in 16th-century Europe, with sections on its history, customs, religion and language. His first and less famous ‘De Romanis Piscibus libellus’ of 1524 is also included, an account of all the kinds of fish which could be caught in the River Tiber, as well as ‘Descriptio Larii Lacus’, a topographical account of Lake Como, near which Giovio lived.
In a fine contemporary binding, probably from southern Germany: the blind stamps of the Crucifixion, with the snake wrapped around the Cross and St Peter is typical of sixteenth century bindings from Bavaria and Saxony.