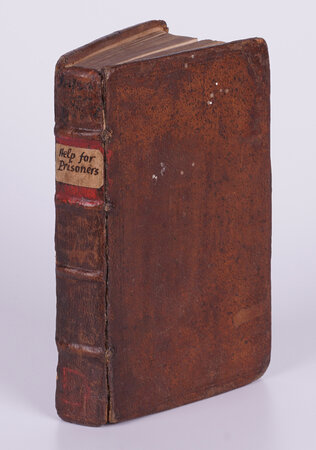 Instructions and Devotions for the Afflicted and Sick, With some Help for Prisoners, Such especially as are to be Tried for Life. London? 1705.

A delightful and scarce prayer book for those in time of need, particularly the sick and those in prison. The first section gives the instructions for the afflicted, which is followed by ‘Prayers in particular Occasions (from p. 84) which include ‘In any Publick Calamity’ and ‘In time of Thunder, Lightening, Storms’. The final section, ‘Instructions and Devotions for Prisoners (pp.242-274) is particularly addressed to ‘those who are condemn'd to die’. Gother warns: ‘First, in avoiding, as much as may be, the common Contagion of Prisons, that is, ill Company, by which many, who have gone in Innocent, have come out Corrupt and Vicious... Secondly, in avoiding that too general Practice of Intemperance, which has many Time the Authority of Men of Principles to recommend it. The Spirit in Confinement is desirous of Relief against all manner of Dejection, which for want of Employment or Diversion, is there too apt to seize it. Society is the obvious Remedy that presents itself, and wretched Custom persuading Men there's no maintaining this without drinking; hence this is usher'd in under the Cover of Necessity, or Convenience, and one Evil is made the Remedy of another... Thus by Degrees the Life of a Prison becomes a Life of continual Dissipation, of Intemperance, and of very unbecoming Entertainments... There follows a series of prayers, invocations and instructions for those condemned to death, ending at the place of execution and the final words: "O God, be merciful to me a Sinner; O God, be merciful to me a Sinner; Lord Jesus, into thy Hands I commit my Spirit; Lord Jesus, receive my Soul". Finis’.
ESTC lists Instuctions [sic] and devotions, 1697 (Wing G1329dA) at the BL, Downside, Bodleian and Society of Jesus Library; another and Folger and OCLC adds Newberry and Durham (ESTC r177558). A variant title with the correct spelling is not listed in Wing but is recorded in ESTC (r223703) at BL and Folger. ESTC t139558 lists this edition at the BL and Downside only. Further editions were published in 1712 and 1725.