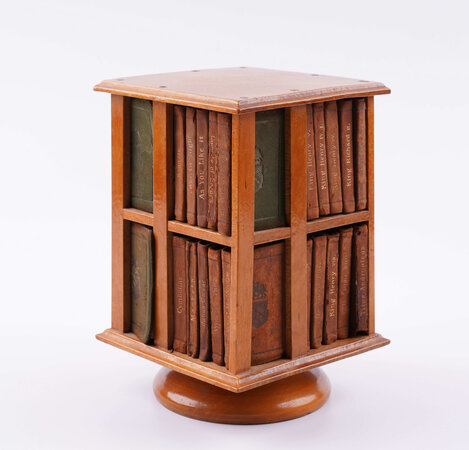 40 volumes, 64mo, (50 x 32 mm), each volume bearing a frontispiece with half-title on the recto, and with the dedication leaf ‘by Special Permission to Miss Ellen Terry’, printed on fine India paper, bound in contemporary green chamois leather, marble effect endpapers, central armorial device blind stamped on the front covers with blind stamped single fillet border extending across the spine to both covers, spines lettered in gilt, small chips to the spines of As You Like It, Venus & Adonis (split along joint) and King Lear (larger portion missing at foot of spine), the gilt faded to differing degrees by volume, the green colour of the reversed calf bindings faded along the spines and the front covers on volumes situated at the edge of the bookcase, gilt edges, the whole housed in the original plain polished oak swivelling bookcase.

A delightful example of the most charming of David Bryce’s ‘Ellen Terry’ series of miniature literary sets. The 40 volumes include the plays, the sonnets, a biographical sketch and a glossary. The editor was J. Talfourd Blair.