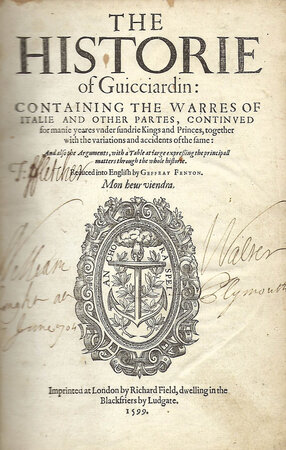 The Historie of Guicciardin; Continued for manie yeares under sundrie kings and princes, together with the variations and accidents of the same: and also the arguments, with a table at large expressing the principall matters through the whole historie. Reduced into English by Geffray Fenton. London, Richard Field, 1599 [1594].

Second Edition in English. Folio in sixes (270 x 190 mm) pp [viii], 786, 789-943, [10] table, in contemporary half calf over marbled boards, spine badly damaged by fire, label lettered in gilt, with the contemporary ownership inscription of T. Fletcher on the title page and a later one, ‘William Walter, bought at Plymouth 17 June 1704 and with the heraldic bookplate of Robert Parker on the front pastedown.

Described in PMM as ‘The First History of Europe’, Guicciardini’s masterpiece was published posthumously by his nephew, Agnolo Guicciardini, with abridged versions appearing from 1544 and the complete text not published until the Venice edition of 1567. By the end of the century, there had been at least ten editions in Italian and it had been translated into Latin, English, French, Spanish, German and Dutch. Geoffrey Fenton’s English translation was first published in 1579.
‘Guicciardini wrote the first history of Italy within the larger context of the European system of states and thus demonstrated the synchronistic interdependence of political events all over the continent. He was less interested in the facts themselves (which he often derived from quite unreliable sources) than in their causes and effects; these he discussed with the perspicacity of a Rennaissance politician and diplomatist, dissecting the intentions and actions of the chief players on the European stage and proving - to his own satisfaction and that of his readers - that worldly passion, ambition and self-interest are the mainspring of human activity’ (PMM, p. 52).