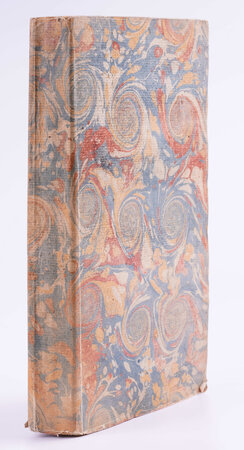 A scarce collection of works on the theme of love put together by Jean Baptiste de Saincric who was inspired to do so because of the rarity of the original publications. A Bordeaux doctor who specialised in medical hygiene and forensics, Saincric wrote widely on the medical topography of Bordeaux and its surroundings. He was a member of the Académie de Bordeaux and was twice president of the Société de Médecine de Bordeaux in 1824 and 1837. Dedicated to ‘Sophie’, this work is a book of parts, with ‘Avis de l’Editeur’, ‘Suite de la note du libraire’ and ‘Introduction’ by way of prefatory material, then the title work, ‘Le Sacrifice de l’Amour, ou la Messe de Cythere’ (pp. 17-48) and ‘Sermon prêché a Gnide, a la Cérémonie du Mai, par le berger Sylvain’ (pp. 49-63). The major part of the volume is the dictionary of amorous terms, which is taken largely from Marechal’s Dictionnaire d’Amour, 1788, with additional material from the earlier Dictionnaire de l’Amour, dans lequel on trouvera l’explication des termes les plus usité dans cette langue, 1741 by Jean-François Dreux du Radier. An index follows the dictionary.

‘The Little Dictionary of Love has become very rare; you can only find it in very few libraries. It therefore seemed urgent to offer a new edition of it, corrected and augmented. In taking on this work, we believe we are performing an essential service to the fervent lovers of Venus and of his dear son. We have not, moreover, omitted anything which might make this new Dictionary worthy of public favour. It collects together the most striking articles by berger Sylvain with a work which was published anonymously at the Hague in 1741; and we have improved it with a host of pleasant pieces, taken from the best writers’.