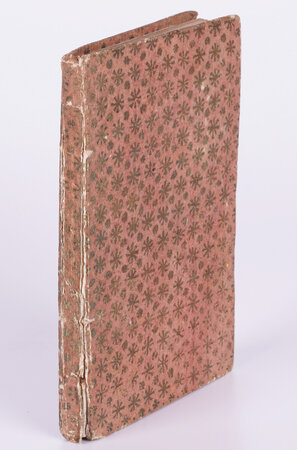 The English Hermit or, the Adventures of Philip Quarll, who was lately discovered by Mr. Dorrington, a Bristol Merchant, upon an uninhabited Island; where he has lived above fifty Years, without any human Assistance, still continues to reside, an [sic] will not come away. Adorned with Cuts, and a Map of the Island. London, John Marshall, circa 1790.

24mo, (118 x 75 mm), wood-engraved frontispiece and pp. [3]-90, with 24 part-page woodcut illustrations throughout the text and a full-page woodcut map of the island, woodcut from another work used (wrong way up) as the final pastedown, in the original pink and gilt patterned (gilt faded) paper-covered boards, foot of spine splitting and joints fairly weak, surface of rear board rubbed and extremities a little worn, otherwise a good copy, with the booklabel of Nigel Temple.

A lovely copy of a rare edition of this famous imaginary voyage, first published in 1727. Considered to be one of the best of the English imitations of Robinson Crusoe, The English Hermit was staggeringly popular, in England, throughout Europe and in America. Alternately attributed to Edward Dorrington and Alexander Bicknell, the identity of the author remained unknown until Arundell Esdaile discovered a rare edition in which the dedication was signed ‘Peter Longueville’. His hypothesis was that Longueville, angered by the publishers’ alteration of his original and their invention of Edward Dorrington, privately published his own edition in which he denounced the false changes.
Dottin described this once seminal work as a ‘genre hybride - à mi-chemin entre le récit d’aventures philosophiques et le conte de fées’. Its popularity as an adventure story is woven into the fabric of literature: George Crabbe ranked it with the Bible and Pilgrim’s Progress as books to be found in rural homes, while Dickens, Thomas Day and Charles Lamb all wrote about it. The number of editions published - in many languages - is impressive. Marshall evidently recognised the strength of its appeal to a child’s imagination and published numerous editions.