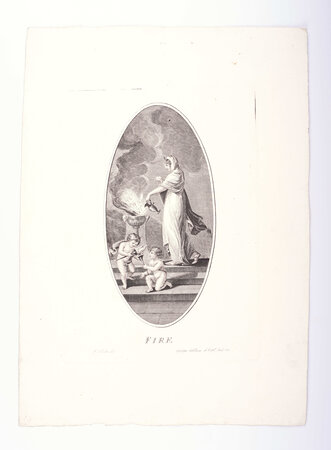 A lovely set of this rare series of prints depicting the Elements. This is a charming Italian and English collaboration, engraved and printed in Italy from an original by an English artist, using English language headings and presumably sold in Italy to an English market. The combination of the English artist and the use of English titles would have had a particular appeal to the traveller on the Grand Tour. The prints may have originally been published by a London print gallery, to whom Hamilton supplied a number of drawings, but we have traced no other version.
The British painter William Hamilton had initially trained as an architect but was sent to Italy by the neoclassical architect Robert Adam, who employed both Hamilton’s father and the young Hamilton, whose first job was working for Adam as a decorative painter. Hamilton spent two years in Rome where he studied under the painter Antonio Zucchi, who later married Angelica Kauffman. On his return to England Hamilton established a reputation for himself painting theatrical portraits and illustrating scenes from Shakespeare. He was commissioned to create works for Boydell’s Shakespeare Gallery and was one of three principal illustrators of Boydell’s illustrated edition of Shakespeare, a massive project which ran from 1786 to 1805. He also contributed illustrations to Bowyer’s History of England and Thomas Macklin’s Bible, many of which were widely reproduced and sold as popular prints. Hamilton’s style was reminiscent of the cult of sentiment prevalent at the time and his work was clearly influenced by Angelica Kauffman and Henry Fuseli. These classical representations of the four Elements are typical of Hamilton’s output in combining sentimental interpretation with distinctively dramatic settings.
Giuseppe dall’Aqua was a northern Italian engraver, son of the engraver Cristoforo dall’Aqua (1734-1787). A native of Vicenza, he began his career as an apprentice in the Remondini press of Bassano, where it is thought he continued to work for some years. In 1791 he became beadle of the Accademia Olimpica in Vicenza and later moved to Verona and Milan. Dall’Aqua is known to have copied many prints from the prolific Italian printmaker Francesco Bartolozzi (1727-1815), who worked in London.
‘[Hamilton’s] pleasantly plump and youthful figures were better suited to the less pretentious format of book illustration than that of history painting. His attractive romantic scenes appear in many editions of 18th century poets ... Hamilton was capable of being an accomplished draughtsman in a variety of styles; his album of drawings (London, V&A) includes work reminiscent of Henry Fuseli and Angelica Kauffman as well as more distinctive compositions nervously constructed with repeated, scratchy strokes of the pen’ (Geoffrey Ashton in Grove Dictionary of Art, online).

We have traced only one copy of these prints, a coloured and framed set appearing at auction in Rome, 28 October 2014. In addition to the V&A album cited above, the Huntington Library has another sketchbook of drawings by Hamilton.