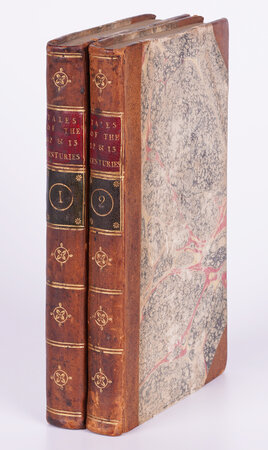 Tales of the Twelfth and Thirteenth Centuries. From the French of Mr. Le Grand. Vol. I [-II]. London, Egerton, Hookham, Kearsley, Robinson, Bew and Sewel, 1786.

The scarce first English edition of Fabliaux ou contes du XIIe et du XIIIe siècle, Paris 1779, compiled and edited by Legrand d’Aussy, conservator of French manuscripts in the Bibliothèque nationale. The work consists of 37 ‘original stories, serious and comic’ taken from French legends and, as such, presenting a very different impression on the English reader, who would have been introduced for the first time to many of the tales (although some, notably the Arthurian tales, would have been well enough known). The work is prefaced by a longish essay by the anonymous translator on the origin and nature of legend and fables. The tales are accompanied by explanations of what is known about each story and where it has been reworked: ‘with an account of the imitations and uses that have since been made of them, by Bocasse [Boccacio], Molière, Bossuet, La Fontaine, Racine, Corneille, Voltaire, Rousseau, and other modern authors’ (advertisement).
Samuel Badcock wrote in the Monthly Review: ‘These Tales shock probability. We cannot realise many of the incidents, yet they discover a vigorous and wild imagination. They awaken curiosity; and as they are generally short, they are seldom tedious: and we easily suffer ourselves to be carried away by the pleasing illusion into the land of inchantment [sic]’ (MR 76 p. 61).