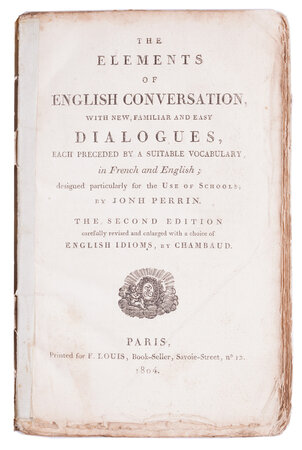 The Elements of English Conversation: with new, familiar, and easy dialogues, each preceded by a suitable vocabulary in French and English; designed particularly for the use of schools. (The second edition carefully revised and enlarged with a choice of English idioms). Paris, F. Louis, 1804.

A delightful phrase book marked up by an early owner. Most of the markings are simple lines or crossings highlighting specific words and phrases, but there are also corrections both to grammar, such as ‘He have `[has] consulted his friends’, to spellings, such as ‘wrethed’ altered to ‘wretched’ and to sense, such as ‘N’avez-vous pas dédaigné ses conseils’ which was translated as ‘Have you not disdained his caresses?’ and has been corrected in manuscript to ‘councils’. The first part of the work contains sections of vocabulary followed by short phrases setting the given words into context. The second part of the work, ‘New, Familiar and Easy Dialogues, each preceded by a suitable vocabulary’ (pp. 67 onwards) does more of the same but using a more sophisticated vocabulary in a series of fifty dialogues. This is followed by a final glossary of English idioms, also in parallel text and in alphabetical order.
Jean Baptise Perrin was born in France but moved to Dublin where he became a teacher of French, mainly living in the houses of the gentry and tutoring their children. He was politically active and is thought to have been involved in the invitation to the French government to invade Ireland in 1795. He was elected an honorary member of the Sons of the Shamrock in 1784. He wrote numerous books of language instruction both for children and adults as well as a couple of more literary productions, Fables amusantes, 1771 and La Bonne Mère, contenant de petites pièces dramatiques, 1786. The present work was first published in 1774 (OCLC lists Chicago only) and ran to numerous editions, most of which are now scarce.

OCLC lists the University of Kentucky only; not in COPAC.