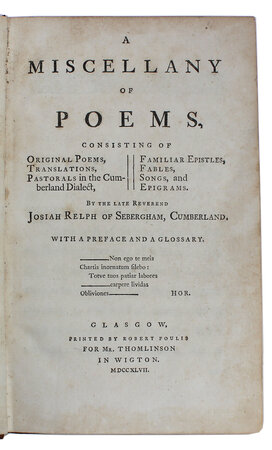 A Miscellany of Poems, Consisting of Original Poems, Translations, Pastorals in the Cumberland Dialect, Familiar Epistles, Fables, Songs, and Epigrams. By the late Revered Josiah Relph of Sebergham, Cumberland. With a Preface and a Glossary. Glasgow, Robert Foulis for Mr. Thomlinson, 1747.

First Edition. 8vo, (250 x 120mm), pp. [xlix], 157, a few slightly browned pages and worming towards the end, touching some letters of the glossary and contents, but without serious loss, in the original sheep, single gilt fillet to covers, spine with raised bands, ruled in gilt, red morocco label lettered in gilt, joints cracked but firm and corners slightly worn.

The first appearance of the collected poems of Josiah Relph, including his poems in the Cumberland dialect. The collection was posthumously published and was edited by Thomas Sanderson, who supplied the biography of Relph in the preface (pp. viii-xvi). A lengthy glossary is also included as well as a contents leaf at the end. With a long list of over 30 pages of subscribers, including a final page listing ‘Names of Subscribers come to hand since printing the above List’.
‘Relph’s poetical works were published posthumously in 1747 and 1798. A wider, national circulation of a few of his poems was achieved by their inclusion in Thomas West’s A Guide to the Lakes, 1784, which was read by Wordsworth, Southey, and early nineteenth century poets. Similarly, in the twentieth century, his dialect poetry is included in anthologies of Lakeland verse, such as those of the poet Norman Nicholson (The Lake District: an anthology, 1977). Relph’s best verses are in the dialect of his native county; they are on pastoral subjects, with classical allusions’ (ODNB).