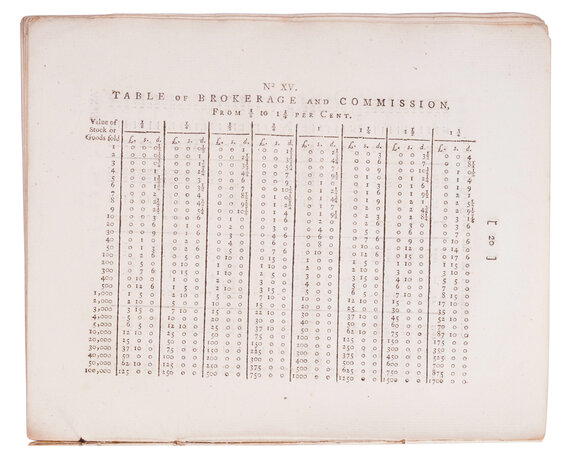 Family Tables; being a collection of such tables as are useful to, and daily wanted in every family. London, W. Richardson for W. Nicoll, 1781.

Apparently the only edition of a scarce book of tables for everyday family use. Simple mathematical tables such as Numeration and Multiplication tables are followed by more complex tables of expenses (by the day, week, month and year), tables of brokerage and commission and of interest and annuities. There is also a table of English regnal periods, guides to currency conversions between English, Irish and French currency (and Dutch cut diamonds) and various more obscure conversions such as one barrel of anchovies = 18lb and a dicker of gloves = 10 dozen pair. A number of tables relating to planters and gardeners is also included, such as a table to show how many trees or plants may be raised in an acre of ground, at different distances.
An interesting character, this ‘eccentric divine, literary compiler, and medical empiric’ (DNB) John Trusler was a clergyman of apparently enormous energies. In addition to his numerous posts as curate, chaplain and lecturer, he established an academy for teaching oratory ‘mechanically’, went to Leiden to study medicine, ran the Literary Society (whose aim was to abolish publishers) and supplied printed sermons in imitation handwriting, to save clergy the trouble of writing their own. He was a prolific author, writing on a wide variety of subjects, including many self-help books. Trusler also established a lucrative printing and bookselling business, which included amongst its publications an edition of Hogarth’s works, a rhyming dictionary, an account of discoveries in the South Seas and various etiquette books. Many of Trusler’s works ran to numerous editions, but this appears to be the only edition of this work.