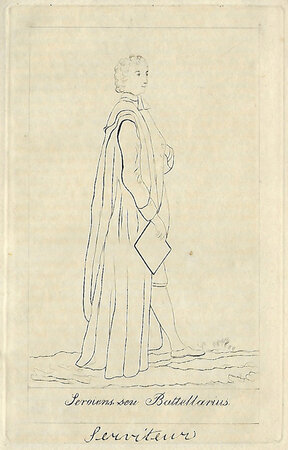 Second Edition. 12mo, (165 x 100 mm), pp. [vi], [7]-124, with 25 engraved plates of costumes, with captions in ink, some feint and written over in manuscript in ink, small holes on pp. 37 and 71, with loss of one letter on p. 37, otherwise clear of the text, in the original drab boards, ink lettering on spine, later paper shelf mark at foot of spine, headcap chipped (with loss of 7 x 9 mm), top of front joint just splitting, boards slightly grubby but sound, spine darkened, internally binding a little sprung, later pencil notes in German on the endpapers and short red crayon rule on title-page.

The first illustrated edition of this scarce French language guide to the university and town of Oxford, a shorter version of which was first published in 1789. With a dedication to the University of Oxford and a Preface dated Oxford, le 10 Octobre, 1804, in which Jung explains his reasons for publishing this guide and for doing so in French.
‘Comme la langue Françoise fait une partie de la bonne education, et qu’il y a fort peu d’etrangers, qui ne la parlent pas, j’ai crû, qu’une description semblable de l’Université d’Oxford ne pourroit pas manquer d’être de grande utilité à ceux, qui souhaitent de la visiter’ (Préface, p. vi).
This is a detailed guide to the university, describing the major buildings, the libraries, the botanical garden and the colleges, with detailed information such as catalogues of paintings in the Ashmolean and of statues, busts and marbles in the Bodleian. There is also a list of the incumbent Masters of the Colleges and Officers of the University. The information on the university itself concludes with specific dates for the four terms: Carême, Pâques, Acte and St. Michael. Following this are brief details about the surrounding attractions and the routes from Dover to Oxford, via London.