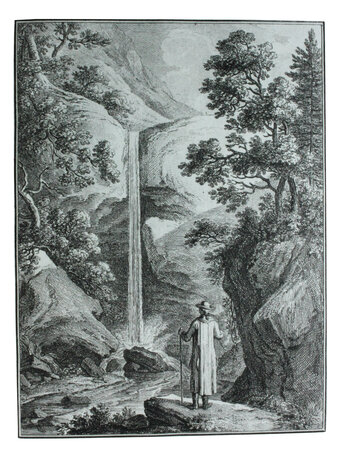 First Edition, Privately Distributed. 4to, (235 x 175 mm), engraved pictorial title page and 11 further numbered engraved plates, (plate marks between 157 and 151 x 112), the first plate with two landscape engravings one above the other, all the others single portrait landscapes, in contemporary olive green boards, worn at extremities, spine chipped.

A delightful suite of plates for young children which appears to have been produced for private distribution by the artist to friends, pupils or patrons. Evidently intended for presentation over a period of years, the title-page is dated ‘178-’, with the final digit left blank to be completed in manuscript: in this copy it has been filled in as ‘1782’. Lonchamp cites only examples filled in as ‘1783’ and ‘1784’, making this a fairly early presentation, though there is a known copy dated ‘1781’ (and one undated example, with the title-page left blank).
The title page depicts a woodland scene with a little boy hard at work with his drawing board, accompanied by a thoughtful older girl, who looks out at the reader with a penetrating gaze. The first of the plates includes two scenes, both landscape format, one above the other, and both depicting water scenes with no figures. The other eleven plates are all portrait landscapes, depicting scenes around Winterthur, with mountains, dizzy ravines, farm scenes, rivers and waterfalls. All of these include figures relating in different ways to the landscape, such as little boys playing a game on a bridge over a river, an elegant figure gazing in awe at a distant waterfall and a naked girl who, sitting on a rock in the shallows of a lake, appears to be washing her feet.
This collection, specifically intended for children, may have been born out of the success of Schellenberg’s twelve leaf folio collection of Swiss views, published in 1779. In 1786, the present suite was reprinted in a commercial edition in Augsburg under the direction of Annert.

No copies traced in America.