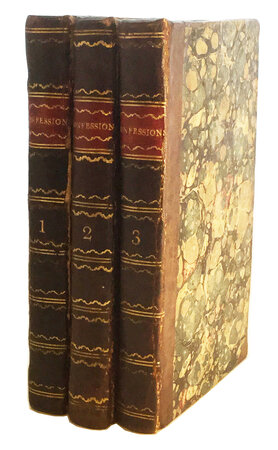 Confessions in Elysium; or the Adventures of a Platonic Philosopher; taken from the German of C.M. Wieland; by John Battersby Elrington, Esq. Vol. I [-III]. London, Minerva Press, Lane, Newman & Co., 1804.

First Edition, Minerva Press (Second) Issue. Three volumes, 12mo (170x 96 mm), pp. viii, xvi, 200; [iv], 223; [iv], 228, upper corner of I B2 torn away (wear creased along fold), not touching text, rectangular tear from half title of volume III, with loss but not touching text, in contemporary half calf over marbled boards, spines ruled and numbered in gilt, red morocco labels lettered in gilt, surace wear to front joint of volume I, otherwise the bindings slightly tight and the spines a little bright and probably touched up, with the contemporary heraldic bookplate of John Congreve in each volume.

A scarce translation of a philosophical novel by Wieland, Geheime Geschichte des Philosophen Peregrinus Proteus, first published in Leipzig in 1790-91. Wieland adapts the classical Greek setting by placing it within a quasi dream sequence - the narrator has the ability to listen to the souls the dead - where he is able to examine the life and spiritual development of the hero, the Cynic philosophier, Peregrine Proteus as he looks back on his life after his famous public suicide. The narrator recounts a conversation between Peregrinus and Lucian which takes place in Elysium. The novel owes much to Wieland’s earlier Geschichte des Agathon, 1767, which is celebrated as the first Bildungsroman or coming of age novel.
‘The original author treads with unequal, and sometimes unsteady, steps, in the track of the abbé Barthelemi, and attempts to describe Grecian manners and Grecian systems. The ancient veil, however, imperfectly covers modern ideas; and, though a part is antique, modern decorations often expose the fallacy. The confessions, as the title imports, are in Elysium. Peregrine Proteus (not the son of Neptune) meets Lucian in Elysium, and recounts a series of adventures, scarcely probably, with descriptions neither antique, appropriate, nor always decent. In short, the English reader would have lost little had the Confessions retained their original Teutonic garb. The Agathon of Wieland is again introduced: he should have been condemned to everlasting oblivion’ (Critical Review, November 1804, pp. 359-360).
With a dedication to Prince William Frederick of Glocester [sic], signed I.B. Elrington and a note to the subscribers, signed ‘The Translator’, although no subscribers list is known. A four page preface, ‘To the World’, printed in italics, is signed ‘I.B.E.’ and dated London, March 1st 1804. This scarce translation was first published by Bell; this is a remainder issue published by the Minerva Press, with new half-titles and title-pages. An earlier translation of Wieland’s novel, by William Tooke, was published under the title Private History of Peregrinus Proteus the Philosopher, London, Joseph Johnson, 1796.

Both issues of this novel are very scarce. OCLC lists the Bell issue at Cambridge and London University only and this Minerva Press issue at Yale, New York Society Library and Penn only.