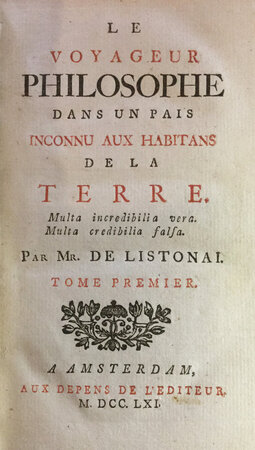 An extraordinary philosophical voyage in the form of a dream sequence to the land of the Sélénites on the moon. The voyage is made by means of one of the earliest fictional aeronautical devices, a complex interplanetary flying machine which takes passengers across the hyperboric region 'à force d'x et d'y' and is flown by a specialist pilot, 'intrépide calculateur de l'infini'. In addition to their flying machines, the Sélénites have a technologically advanced society, with running water in all the houses and air conditioning in the hospitals. There is no concept of ownership, of 'mien' and 'tien', and so there is no crime. In the education of children Villeneuve has a particularly radical outlook, with all the children brought up to be ambidextrous and both sexes educated to the same extent. The Sélénites have also managed to preserve some works that have been lost on earth, including Cicero's Republic and considerable fragments from the library of Alexandria.
Hartig criticises some of Villeneuve's fictional devices as being unoriginal, such as the hero's transportation from Rome to Paris in 48 minutes, or to Japan in 16 or 17 hours, achieved by the author's being suspended in air while the earth rotates. This apparently was an idea first advanced by Fontenelle in 1686 and subsequently refuted. For all that, it is a nice conceit and, scientific accuracy apart, it makes for good fantasy. Hartig further condemns the work for its second volume, which contains only philosophical digressions, 'd'intérêt médiocre'. But Versins devotes a considerable amount of time to the work, which he hails as 'très étonnant' in many aspects, in being pre-Mercier as a utopia set in future time and in being pre-Tiphaigne de la Roche in its communications theories and in its ground-breaking introduction of the astronaut. Hartig adds that the work was severely criticised in the Journal encyclopédique, 1761. Albert Soboul, in his Utopies aux Siècle des Lumières, calls this work 'the perfect realization of the age of enlightenment' (see Lewis, p. 195).