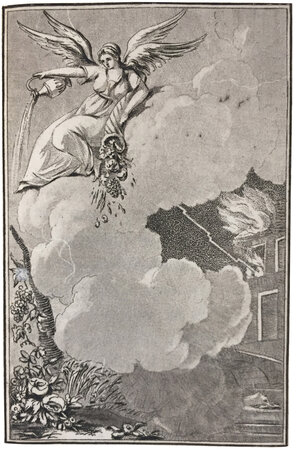 A scarce illustrated edition of Voltaire’s philosophical novel, printed in London for Gaetano Polidori (1764-1853), father of John William Polidori and grandfather of Dante Gabriel and Christina Rossetti. Gaetano Polidori came to London in 1790 where he taught Italian as well as translating a number of works into Italian, including Horace Walpole’s The Castle of Otranto and John Milton’s Paradise Lost. He published a number of works, including those of his grandchildren, and set up a private press in his house in London.
This is a delightful pocket edition of Voltaire’s enlightenment tale, first published in a slightly shorter form under the title Memnon in Amsterdam, 1747, with the full text appearing in the following year under the title Zadig. Second only to Candide among Voltaire’s contes philosophiques, and based on the Persian tale The Three Princes of Serendip, Voltaire uses the oriental setting to explore religious and metaphysical orthodoxy through the moral development of the protagonist. The oriental backdrop allows for thinly disguised references to the political and social problems of contemporary France.
The text is accompanied by a very attractive suite of thirteen aquatint plates and two vignettes drawn and engraved by Le Cœur. ‘Jolie petite édition peu commune de ce roman. Les figures existent imprimées en couleurs’ (Cohen-de Ricci).