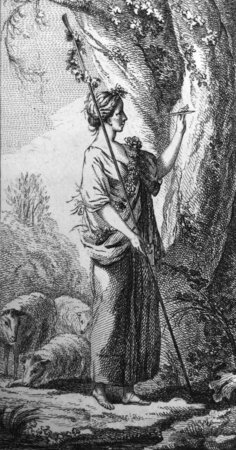 A handsome copy of this very attractive first French translation of Gessner's Idylles, beautifully illustrated throughout. The frontispiece, depicting a shepherdess in a pastoral scene, is engraved by Claude-Henri Watelet (1718-1786) after Etienne de La Vallée-Poussin (1735-1802) and there are twelve further engravings in the course of the text, as head- and tail-pieces. Eleven of these are also engraved by Watelet after Lavallée-Poussin and Pierre and the twelfth is by Watelet’s long-term lover, Marguerite Lecomte (1717-1800). Each of the pieces is signed.
This is an early work by Huber, only preceded by another translation from Gessner, his La mort d'Abel, 1760. Huber, the first to introduce Gessner into France, was to go on to be a prolific writer and translator, always from the German, specialising mainly in poetry and in the history of art, particularly antiquities. He also published a work of instruction in the German language and in 1766 took up a post teaching French at the University of Leipzig. Turgot was among Huber’s students and it was he who supplied the preface to the present work as well as the translation of the first idyll. Huber’s translator’s preface is also of considerable interest for its discussion of contemporary German literature, arguing its superiority over Italian and English literature, analysing the works of several authors and citing numerous passages of particular value to the man of taste.