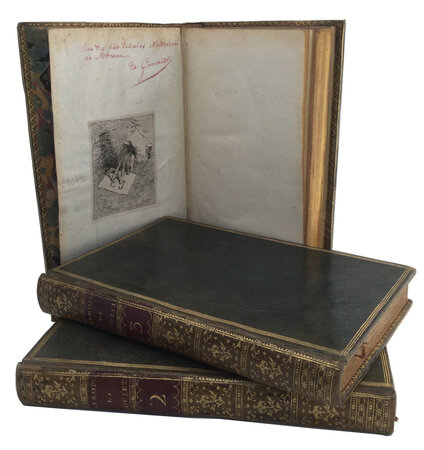 First Editions. Three volumes, 8vo, (180 x 105 mm), engraved frontispiece and engraved title-page to each volume and pp. [iii]-x, 302; 316; [iii]-vi, 319, [1] errata, each volume with additional engraved head- and tail-piece, all by Moreau, engraved by Launay, Simonett, Duclos and Martini, additional vignettes throughout the text, in contemporary green morocco, triple gilt fillet to covers, spines gilt in compartments, two red morocco labels on each spine, lettered and numbered in gilt, marbled endpapers, gilt edges, with the ex libris of Henri Bonnasse and an unidentified one with the monogram ‘CC’ (?) on the front pastedown and the bookplate of the Goncourt brothers, designed by Gavarni and engraved by Jules de Goncourt, on the front endpaper of the first volume, with the inscription in red ink, ‘Une des plus delicates illustrations de Moreau, de Goncourt’, from the library of Claude Lebédel.

Edmond and Jules de Goncourt’s copy of this popular French song book, elegantly printed with fabulous illustrations by Moreau. Pierre Laujon was a celebrated society host, who organised soirées and entertainments for a select few, at which his songs and ballads would be performed. His ballets, operas and verse were moderately popular and, eventually, at the advanced age of eighty, gained him his place in the Académie française. This collection contains the melodies and lyrics to 264 songs and ballads. Mostly written in a lively and humorous style, the songs celebrate love and drunkenness, birth and marriage, the follies of old age and the daily social whirl and pastimes of the ancien régime. Moreau’s illustrations are particularly evocative of Laujon’s world of aristocratic entertainment, as shown in the vignette in the second volume which depicts a magic lantern show and its enraptured audience.
This is a stunning copy from the library of the brothers Edmond de Goncourt (1822-1896) and Jules de Goncourt (1830-1870), bibliophiles, literary partners, models of bon goût and novelists, mostly remembered today for the Prix Goncourt which is probably the most important literary prize in French literature. The brothers’ passion was the literature, art and culture of the eighteenth century and their many collaborative works were based on meticulous collections of books, engravings and documents of the era. One of their principal enthusiasms was the work of Jean-Michel Moreau whose life and works the brothers wrote about extensively (including Les vignettistes, Eisen, Moreau, Paris, Dentu, 1870; L’art du dix-huitième siècle, Paris, 1880-1882).
Altogether the three volumes include three elegant engraved title-pages by Moreau (that of the first volume is used again in the second, with only the volume number changed), a frontispiece by Moreau, engraved by Launay, Simonet and Martini and three engraved head-pieces by Moreau, engraved by Duclos and Martini and three tail-pieces by Moreau, engraved by de Launay (vols 1 & 2) and by Moreau himself (vol. 3). The text itself is elegantly printed with abundant decoration, typographical ornaments and small vignettes. The third volume, which is usually found with the first two, has the title ‘Les A Propos de la Folie, ou Chancons Grotesques, Grivoises et Annonces de Parade’.