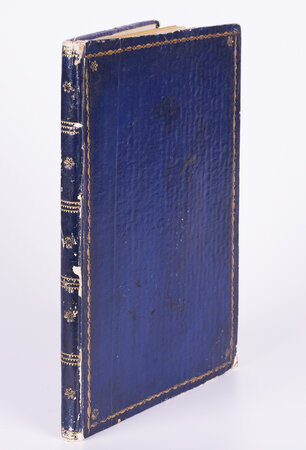 Three works in one, small 4to (200 x 145 mm), pp. [32], partly in parallel text with the English translation; pp. [24], with the divisional title ‘Rime Faceto-Morale’ handstamped ‘Estemporanee’; pp. [8], some of the paper lightly but evenly browned, in contemporary blue paper boards with simple gilt roll tool border, slim spine ruled into compartments in gilt with floral device in each compartment in gilt, extremities worn and some scuffing to the surface of the spine and boards, yellow edges.

A curious Ossian style production, with a Norwegian saga written in Italian terza rima and printed alongside the supposedly English prose original, ‘Almurka and Snivenus’. Set in early medieval Norway where the enlightened monarchs Alminda (the name has been changed to be more resonant with the Italian language) and Sniveno reign over a peaceful nation, though under the rule of Britain. One sorrowful day the King of Britain summons Sniveno, ‘come to the English court; an high reason of state requires it’ and despite the anguished entreaties of his wife, fearful of the raging seas, he submits to the order and embarks for Britain. A few days later, the vessel ‘was assailed in a dark night by a terrible storm. The ship was flinged up and down by the waves and beated at once by winds, hail, and rain. The thunder bursted in the darkness. The Master of the ship was appaled for the danger; the thunderbolt rending the clouds sended on the surge a flash of livid light. The sailors had lost their art and spirit. The vessel was plunged down almost topsyturvy and cryes and groans were heard. The whirlwind broke masts and sails; the surpassing and raged waves fluttered around the bodys of agonizing and dead men, and some of them not yet entirely drowned uttered in their throat with a dying groan the name of their fathers, children and wives’. The spirit of Snivenus assumes the form of the drowned king and returns in a dream to Almurka, who goes to the shore where she finds her husband’s corpse and promptly dies of grief. The Italian poem is clearly the original, but the florid English translation, so clearly non-native, is charming.
Alminda e Sniveno first appeared in Milan in 1818 and this second edition was first published in 1821. OCLC lists only the 1821 edition of Novella Romantica, at Bodleian and the BN. The Bodleian copy is catalogued as pp. [24], which brings the volume to the conclusion of ‘Alminda e Sniveno’, with a final Italian poem printed on the verso. In the present volume, the dates on the imprint have been altered to 1823 and a further eight pages have been added, comprising Italian poems on mainly historical themes. The second work in the volume, Pascoli’s Improvvisi, contains a selection of verse on various subjects; it was first published in 1812 (actually 1821) with slightly differing contents. The divisional title, ‘Rime Faceto-Morali’ has been stamped ‘Estemporanee’. The final work in the volume is a New Year’s poem for 1823. Although not recorded as by Pascoli, its inclusion in this volume and the similarity with his other publications, would suggest his authorship.

Novella Romantica: OCLC lists BN and Bodleian only, both dated 1821, Bodley copy pp. [24]. The other two works not in OCLC.