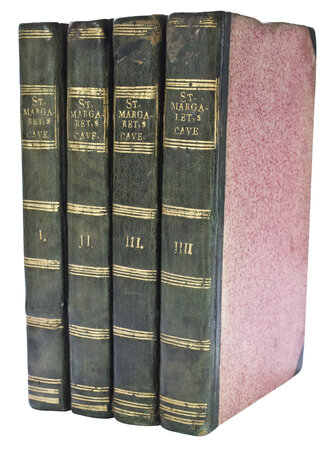 First Edition. Four volumes, 12mo, (168 x 101mm), pp. xxviii, [2], [3]-260; [iv], 294; [iv], 296; [iv], 320, with the half-titles, in contemporary green half calf over pink mottled boards, flat spines divided into compartments with triple gilt rules, lettered and numbered in gilt directly onto the spine, corners bumped and extremities a little worn, the top of the front board of vol. IV slightly crushed and upper compartment of spine a little dented, some sun bleaching to the colour on the boards, probably bound on the continent, from the Starhremberg library.

A very attractive copy of a scarce gothic novel by Elizabeth Helme, said by Janet Todd to be her most successful romance. A leading Minerva novelist, Helme didn’t write predominantly in the gothic genre, but in this tale she experiments with it and follows Ann Radcliffe into the middle ages. The narrative is presented as an ancient manuscript chronicle of events that took place in fifteenth century Northumberland, Bremen and Denmark. At the centre of the plot is the attempt to establish Margaret as the legitimate daughter and rightful heir of Sir William Fitzwalter. This is eventually achieved through the help of the Austin, the Franciscan hermit who lives in St. Margaret’s cave, which is connected to Castle Fitzwalter by secret subterranean passages.
Following the triumphant success of Helme’s Louisa, or the Cottage on the Moor, 1787, which was a best-seller in England and on the continent, St. Margaret’s Cave was published in French as La Caverne de Sainte-Marguerite, Paris 1803 and in German as Die Margarethenhöle oder die Nonnenerzählung, Berlin 1803. A second edition was published by the Minerva Press in 1819.
As well as the obvious influence of Ann Radclife, it is interesting that Janet Todd also speaks of the influence of Restif de la Bretonne’s narratives and William Godwin’s philosophy. ‘Although derivative of other writers, such as Radcliffe and Marivaux, she tells her tales well and smoothly, and her conventional plots, of fair maids, noble sons, hidden identities and aristocratic property rights, hold the reader’s interest without much recourse to suspense and horror’ (Janet Todd, Dictionary of British and American Women Writers, p. 160).
‘[Elizabeth Helme’s] interest centres in personal morality and its relationship with class and wealth; her women are often spirited and independent-minded’ (Feminist Companion to Literature in English).