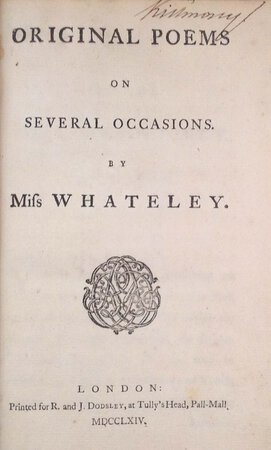 The author’s first book, published when she was 26. The daughter of William Whateley, a gentleman farmer at Beoley in Worcestershire, Miss Whateley appears to have had little formal education but she loved literature and began to write poetry at an early age, contributing poems to the Gentleman’s Magazine as early as 1759. These, and some other poems in manuscript, attracted the attention of some distinguished contemporaries including William Shenstone, William Woty and John Langhorne, who set in motion a scheme to publish a volume by subscription, to which Langhorne contributed some prefatory verses. The 24 page subscription list contains some 600 names, including Elizabeth Carter, Erasmus Darwin, Mrs. Delany and one Rev. Mr. J. Darwell, the man Miss Whateley was to marry. John Darwall, Vicar of Walsall, was also a poet as well as a composer. The husband and wife together ran a printing press and she wrote songs for his congregation which he set to music. They also had six children together, to add to his six from a previous marriage.
The collection includes a number of pastoral poems - ‘artless rural Verse’ as she describes her ‘Elegy Written in a Garden (pp. 56-59) - several odes and poems addressed to individuals as well as some poems reflecting contemporary debate such as that ‘Occasioned by reading some Sceptical Essays’ (pp. 53-55). The final poem in the collection balances the prefatory verses supplied by one of her patrons: ‘To the Rev. Mr. J. Langhorne, on reading his Visions of Fancy, &c.’. Also included is a poem addressed to her future husband: ‘Ode to Friendship. Inscribed to the Rev. Mr. J. Darwall’:
‘Hail! Friendship, Balm of ev’ry Woe!
From thy pure Source Enjoyments flow,
Which Death alone can end:
Tho’ Fortune’s adverse Gales arise,
Tho’ Youth, and Health, and Pleasure flies,
Unmov’d remains the Friend’ (p. 101).
With a seven page dedication to the Hon. Lady Wrottesley, at Perton. The contents leaf, printed as part of the last signature, is here bound at the end. In some copies it has been bound at the front. Despite the wear to the spine, this is an appealing copy in an attractive contemporary binding. A Dublin edition was published later the same year.