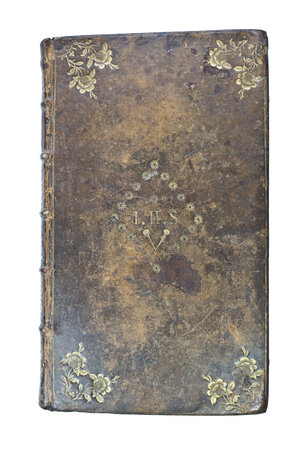 Earnest Advice, particularly to Persons who live in an habitual Neglect of Our Lord’s Supper, considered as a commemorative Sacrifice inseparable from Christianity, and as a Preservative against superstitious Fears, and the immoral Practices, which deface the Glory of our Country, and darken our Prospects of a Life to come. In Forty-Nine Letters. By Jonas Hanway, Esq. London, Dodsley, 1778.

First Edition. 12mo, (172 x 96mm), engraved frontispiece and pp. xiv, x, 11-240, title-page and frontispiece a little stained, some other marks in the text, but generally fairly clean, in contemporary calf, bound for Hanway by his second binder, the monogram ‘I.H.S.’ gilt within a diamond of stars on the front cover, the diamond mirrored on the back cover with a winged hourglass as a centre piece, gilt floral corner pieces on both covers, spine gilt in compartments with continuous chequered and sunburst pattern, red morocco label lettered in gilt, the gilt fairly faded and binding generally a little worn, with the contemporary ownership inscription ‘Jn Fox’ on the title-page.

One of Hanway’s scarcer tracts in an attractive binding by his second binder. Christianity was an integral part of Hanway’s philanthropy, even though only a small number of his works were as overtly religious as the present one, the majority being concerned with practical issues to do with social welfare and the furtherance of his philanthropic schemes. Many of his charitable projects, however, included a specific Christian component, such as his ambitious Proposal for County Naval free-Schools, to be built on Waste Lands, giving such effectual Instructions to Poor Boys, as may nurse them for the Sea Service, London 1783. In this, Hanway’s impressive attention to detail goes as far as to address the religious curriculum for the boys’ education, even to specifying appropriate hymns and prayers.