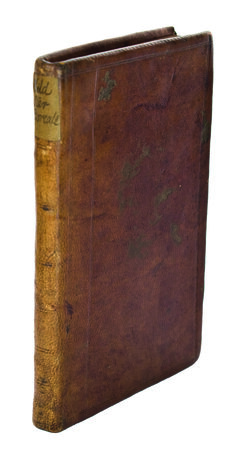 Iter Boreale, with large Additions of several other Poems being an Exact Collection of all hitherto Extant. Never before Published together. The Author R. Wild, D.D. London, for the Booksellers in London, 1668.

Fourth Edition; First Complete Edition. Small 8vo, (140 x 87mm), pp. [3]-122, [4] table, in contemporary sheep, blind-ruled, early manuscript paper label, with the ownership inscription of John Drinkwater, dated 1920, on a preliminary blank, with later booklabel of Michael Curtis Phillips, wanting the pastedowns and the endpapers but with the initial and final blank leaves (A1 and O8 ‘blank and genuine’), some light scuffing on boards but a lovely copy.

A wonderfully fresh copy in a well-preserved contemporary binding: from the collection of Richard Jennings, whose books were noted for their spectacular condition. Robert Wild was a Puritan divine and a royalist, whose occasional licentious tone and reputation for ‘irregular wit’ was said to have so worried Wild’s friend Richard Baxter that he paid his friend a special visit with the intention of rebuking him, only to be reassured after listening to Wild’s thoroughly sound, puritan sermon. The title poem of this collection was hugely popular, first published on St. George’s day in the year of Charles II’s Restoration, under the title Iter Boreale, attempting something upon the Successul and Matchless March of the Lord General Lord Monck from Scotland to London, London 1660 as ‘By a rural pen’. Dryden, who in contrast called Wild ‘the Wither of the City’, described the excitement with which the poem was received in London: ‘I have seen them reading it in the midst of ‘Change so vehemently that they lost their bargains by their candles’ ends’.
Other poems included here are ‘The Norfolk and Wisbech Cock-Fight’, ‘Upon some Bottles of Sack and Claret’, a satire on the politics of Nathaniel Lee, ‘The Recantation of a Penitent Proteus; or the Changling’, ‘The Fair Quarrel, by way of Letter, between Mr. Wanley, a Son of the Church; and Dr. Wilde, a Non-conformist’ and a number of ballads and elegies. Not an uncommon book, fairly well-held institutionally, though the new edition of Wing does not locate copies in the British Library, Yale or Harvard (although each of these does have a variant, with pp. 120 of text as opposed to pp. 122 as here). This is a fabulous copy in a modest contemporary binding from the library of Richard Jennings: the copy exhibited in the Hayward’s 1947 exhibition.