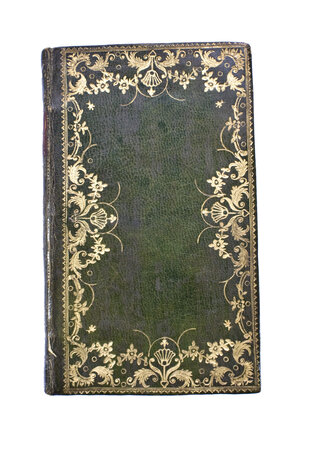 A scarce philosophical work by the 'Dutch Socrates', Frans Hemsterhuis, a Dutch aesthete who lavished as much care in the design of his works as he did in their composition. He wrote a number of essays and dialogues on moral philosophy which brought him into contact with Goethe, Herder and and his life-long friend, Princess Amalia von Gallitzin, who did much to strengthen his reputation amongst the German intelligentsia and encourage the translation of many of his works. Hemsterhuis' ideas influenced some of the greatest German thinkers, including Kant, Novalis, Schlegel and Schiller.
As with all of Hemsterhuis' works, Aristée was privately printed and distributed. The printing is typically elegant, the text block measuring 93 x 47 mm, a small and dense block of text within wide margins, in the present copy measuring 167 x 96 mm. The elaborate green morocco binding on this copy is probably by Thomas Van Os, a leading binder of the last quarter of the eighteenth century in the Netherlands. Van Os was commissioned by Hemsterhuis to create bindings for some of his later works, alongside Christiaan Micke, who bound so many copies of Hemsterhuis’ earlier works for presentation. Of the two, Van Os is more associated with the flat spin, as here, in addition to which this binding bears many similarities with the two bindings (particularly fig. 7) by Van Os reproduced in Jan Storm van Leeuwen’s article in The Book Collector (see The Book Collector, Summer 2001, figs. 6 and 7, pp. 215-216).
'So, let this stand as a charge to collect Hemsterhuis', writes Roger Stoddard in conclusion, 'to look more closely at his books, to solve their mysteries, and to connect the careful designs of his bookmaking with the philosophical texts they embrace and convey with such eloquence. This is just a way of asking you to leave your place marker here to honour Hemsterhuis who always provided a ribbon place marker in the bindings he commissioned for presentation' (p. 189).