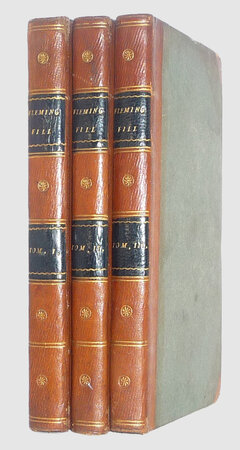 An attractive copy of the first French translation of the second part of Lafontaine’s Leben des Quinctius Heymeran von Flaming, Berlin 1795. This novel was one of Lafontaine’s biggest successes and shows the author at the height of his fictional genius.
‘Leben und Thaten des Freiherrn Quinctius Heymeran von Flaming (Berlin, 1795-6) shows how Lafontaine was able to exploit the new wave of ritterromane, and at the same time could refer to and profit from the already firmly established popularity of Siegfried von Lindenberg (1779) by Johann Gottwerth Müller, the so-called 'Itzehoe-Müller ', as he critically dealt with the controversial ideas about physiognomy... This way of profiting from earlier success stories was one important aspect of Lafontaine's own success. He never aspired to create originally conceived works and did not wait for an inspirational impetus: he was an extraordinarily hard-working man who made his living out of writing. Furthermore, he made clever use of what was to be one of the fundamental characteristics of the popular literary field: the principle of repetition... That William Lane's Minerva Press became the principal publisher of Lafontaine's novels in English is hardly surprising. Of the twenty-three translations into English published between 1797 and 1813, eight came from Minerva: the character of the Lafontaine novels suited the Minerva Press excellently, and one could easily have expected an even more dominant Minerva participation’ (Margareta Björkman, ‘High and Low, Some Remarks on the Reading Culture of the Late Eighteenth and Early Nineteenth Centuries’, in Romantic Textualities, Issue 3, September 1999).