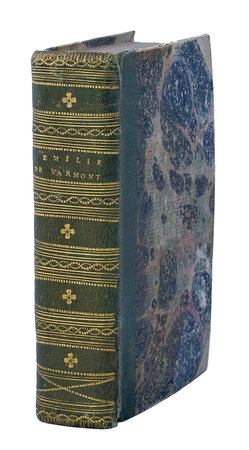 An attractive copy of Louvet de Couvray's novel, with the rare and rather striking frontispieces present in each volume. Uncommon in any state, it is particularly hard to find with the plates, which are not mentioned in any of the references noted below but which evidently belong here and greatly add to the dramatic impact of the narrative.
Taking as its subject matter divorce and the marriage of priests, it is a racy tale with forced vocations and amorous adventures. Set in provincial France, it is written as an epistolary novel featuring Dorothée and Emilie de Varmont, Monsieur Bovile and Madame d'Etioles. It had considerable political influence in France, producing two memorable decrees of the National Convention, the one authorising divorce and the other allowing priests to marry. A piracy of the text gave rise to a court case (Dalloz, Jurisprudence générale du royaume, 1830, XI, 481 and note). Further editions appeared in 1792, 1794 and 1815. It was published more recently by the Université de Provence, Aix-en-Provence, 2001. An English translation was published under the title Emily de Varmont, or Divorce dictated by Necessity, to which are added, the Memoirs of Father Sévin, London, G. Kearsley, 1798 and an American edition, in a translation by Melatiah Nash, was published in New York in 1799 under the title Emilia de Varmont, or the Necessary Divorce, and Memoirs of Curate Sevin: a Moral and Political Tale.