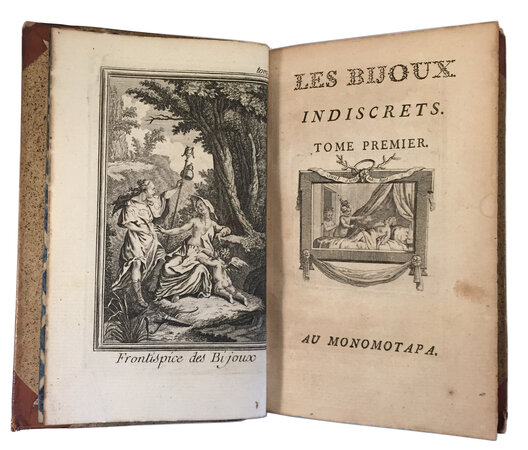 An attractive copy of this early edition of Diderot's controversial novel, listed second by David Adams and given as the second edition by Tchemerzine. The plates all correspond to Adams BI2 except for the first plate in the second volume which has been bound at p. 265 and is marked as such. All the plates have the word ‘Les Bijoux’ underneath the picture and the volume and page numbers marked at the top. The frontispiece, which is the same as Adams’ BI1, is marked ‘tom. I’ and ‘Frontispiece des Bijoux’. The final leaf as called for by Adams, ‘Avis au Relieur pour placer les Figures’ has been discarded.
Three editions of Diderot’s Bijoux were published in 1748, all with the same title and imprint but with varying illustrations, this edition with the shorter pagination than the other two. This is Diderot’s first novel, written to raise funds to pay for the expensive lifestyle of his mistress, Madame de Puisieux. Based on the medieval tale 'Le chevalier que faisait les cons parler' and heavily influenced by Caylus' adaptation of this and Crebillon fils' contes libertins, Diderot soon came to disavow his earliest and raciest work. It caused an enormous scandal on its publication and, along with his Lettres sur les aveugles, was the cause of Diderot's being imprisoned in Vincennes. This is Diderot's nearest approach to the world of Thérèse Philosophe (on the publication of Bijoux Indiscrets this was frequently attributed to him), 'the bawdy, naughty, cheeky world of the early Enlightenment, where everything was held up to question and nothing was sacred' (Darnton p. 90).
Even in this, his most scandalous and light-hearted work, Diderot was beginning to express the philosophical ideas that came to fruition in his later work. 'La critique du cartésianisme, des systèmes à priori, des rêveries de la métaphysique, l'apologie de Newton, certaines théories empiristes et associationnistes, les professions de foi de naturalisme moral montrent que, même dans un ouvrage très léger... Diderot n'oublie pas la philosophie' (H. Bénac, quoted by Henri Berthaut in Grente's Dictionnaire des Lettres Françaises).