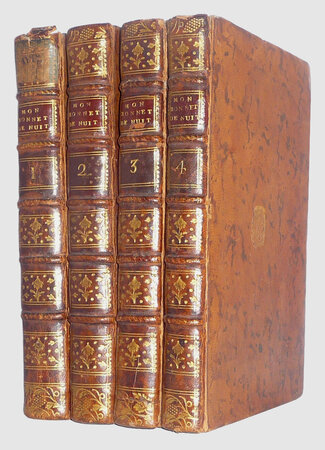 An attractive copy of one of Mercier's most important works, a collection of short essays, some written in the form of dream sequences, and one or two 'contes'. Some parts had previously been published in Mercier's Songes philosophiques, 1768, but this was very much part of Mecier's distinctive style. 'He published prodigiously by recycling passages from one book to another and stretching essays into multi-volume tracts. His major works - L'An 2440, Tableau de Paris, and Mon Bonnet de Nuit - therefore have a formless character. They are composed of short chapters on a wide variety of subjects, which Mercier cobbled together without worrying about narrative coherence. When a book caught on, he expanded it, cutting and pasting and fighting off pirates as he advanced from one edition to the next. The result was never elegant, but it often had a gripping quality, because Mercier knew how to observe the world around him and to make it come alive in anecdotes and essays. There is no better writer to consult if one wants to get some idea of how Paris looked, sounded, smelled, and felt on the eve of the Revolution' (Darnton, The Forbidden Best-Sellers, 1996, p. 118).
The work is made up of two distinct parts. In the first edition, volumes III and IV bear exactly the same imprint as the present edition but have a different pagination, viz. pp. [iv], 390; [iv], 382. It was inordinately popular and many editions followed, both in two and in four volumes. MMF lists a total of twenty-six editions. The final two volumes were also published under the title, Mon Bonnet du Matin.