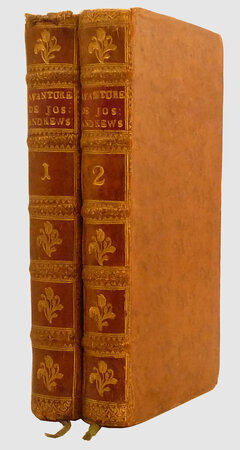 One of two very scarce French editions of Joseph Andrews to appear under a false ‘Londres’ imprint in 1743. Hugh Amory, in his New Books by Fielding, describes this as a concealed edition and suggests that it may be the later of the two. 'The presumption of priority goes to the more complex collation (it’s easier to achieve a regular structure from a printed copy than from a manuscript)'. The translation is of course not by the ‘Dame Angloise’ as claimed on the title page, but by that indefatigable Anglophile, the Abbé Desfontaines. It was reprinted in 1750, an edition which is more frequently seen.