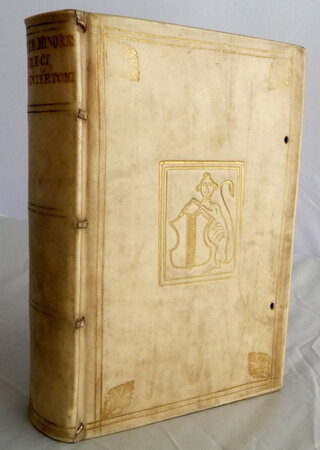 8vo, pp. [viii], 224, 227-533, [1], 88, [1], [2], title-page with typographic border, parallel text in Greek and Latin throughout, tightly bound in continental contemporary vellum, double gilt filet to covers with corner ornaments, central rectangular panels with a hooved long-tailed figure with a human face leaning on a heraldic shield, lacking ties, spine ruled and stamped in gilt, in four compartments, tooling faded and lettered in ink over the faded ornament in the top compartment, with the bookplate of Reinholdi Dezeimeris in Latin and Greek.

A scholarly anthology of minor Greek poetry edited by the English physician Ralph Winterton and first published in Cambridge in 1635. The volume concludes with Winterton’s own substantial commentary on Hesiod. The selection, with a Latin translation printed in parallel text facing the Greek, was based on the earlier compilations of Henry Stephen, published in 1566 and of Jean Crispin, published in 1600. Winterton dedicated his work to Archbishop Laud, presumably out of personal gratitude for his part in helping Winterton to obtain his Cambridge degree. Some incident of unfitting conduct in December 1631, thought to have been a theological debate in hall, had set the authorities of Kings against him and a succession of pleas to grant him his degree had been refused. It was finally Archbishop Laud’s intervention in December 1633 that, within a fortnight, resulted in Winterton’s being granted his degree. Following this setback, Winterton’s Greek metrical version of the aphorisms of Hippocrates was published to such acclaim that he was appointed as regius professor of physic in 1635. His intention had been to extend the present volume but his diligence in fulfilling his professorial duties to the college prevented his doing so.
Winterton’s edition of the minor Greek poets was very popular, appearing in half a dozen editions into the next century. This is a delightful copy of a late seventeenth century edition, bound in contemporary full vellum with a distinctive armorial device - half man, half beast - gilt in the centre of both covers, within a gilt border. Holes in the boards suggest an earlier clasp or the use of ties. These are no longer present and the holes have been covered internally by pastedowns, probably in the eighteenth century. The volume was in the collection of the bibliophile Reinhold Dezeimeris (1835-1913), avid collector of Hesiod amongst other, particularly Greek, authors, and bears his pink Latin and Greek printed bookplate on the front pastedown.