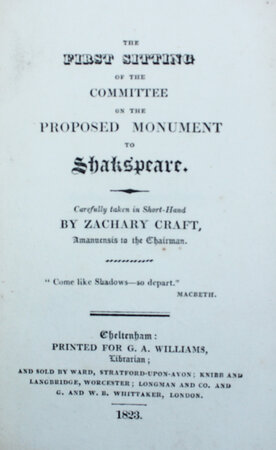 The First Sitting of the Committee on the Proposed Monument to Shakspeare. Carefully taken in Short-Hand by Zachary Craft, Amanuensis to the Chairman. Cheltenham, G.A. Williams, 1823.

Attributed to the architect and traveller Charles Kelsall, this is an entertaining fantasy arising from the proposal to erect a national monument to Shakespeare. Written in the form of a play, it is set in the green-room at midnight, where the committee take their seats around a long table. As they prepare to begin their meeting, there is a peal of thunder and a ball of fire rends one of the walls, through which appears the shade of Aristotle, who addresses the committee with his thoughts on Shakespeare. He is followed by many others, including Longinus, Aeschylus, Molière, Milton (blind), Dryden, Voltaire, Diderot, Johnson, Susanna Shakespeare, Frank Crib (owner of the Butcher’s Shop at Stratford-upon-Avon), Peter Ogee, an Architect of York, Obadiah Flagel, a Schoolmaster of Newcastle-upon-Tyne and Samuel Grim, Plug-turner of the Pipes which supply the Theatre with Gas.